Kills bacteria inside your HVAC system

Mildew thrives in wet, dark environments. When an air conditioner is in use, condensation often forms on the unit's evaporator coils. This moisture from condensation creates the ideal environment for bacteria to grow.

The presence of bacteria in an HVAC system is a common complaint. It can grow and proliferate and make building occupants sick without ever being seen. And the fastest way to spread bacteria through a building is through a forced-air HVAC system.

National Radon Defense dealers use the Breathe EZ UVC Light to resolve indoor air quality issues that can make your home or building uncomfortable and even dangerous. Schedule an indoor air quality estimate with us today to see if this product is the right fit for you! 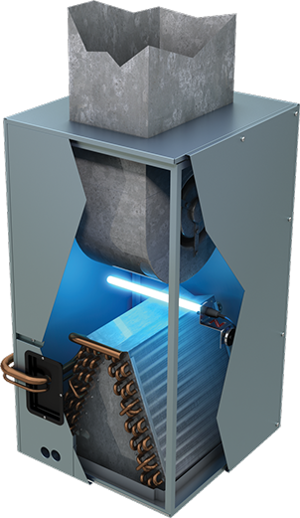 A view of the Breathe EZ UVC Light where it is placed above the coil.

UV-C technology used in the Breathe EZ UVC Light is one of many electromagnetic frequencies emanating from the sun. Like other waveforms, its properties are unique to its wavelength. To synthesize this frequency, a glass tube is evacuated and refilled with argon at far below atmospheric pressure. Added to this is a small amount of mercury. When the mixture is energized (excited) it creates a glowing plasma of electrons that pass through the mercury vapor.

As they strike mercury atoms, a mercury electron is liberated at a frequency representative of mercury's spectral line, which is 253.7nm. The dominant emission (>90%) from these lamps is UV-C energy. The "C" frequency of the electromagnetic UV family has, amongst other things, germicidal effects.

Microorganisms are simple organic structures that readily absorb the UV-C wavelength, causing photo-disassociation (destruction). A microbes DNA (deoxyribonucleic acid) is first to be adversely affected due to its weaker molecular bonds. In hundredths of a second, it suffers irreparable damage. The subsequent loss of genetic instructions causes cell death and/or the inability to replicate, rendering them harmless.

Continuous exposure causes uninterrupted degradation, such as the sun does, only significantly faster. Thus, the UV-C light kills bacteria extremely effectively. With UV-C technology it is possible to destroy more than 99.99% of all pathogens within seconds, without the addition of chemicals, without harmful side effects, inexpensively, highly efficiently and reliably.

Contaminants can restrict airflow inside the HVAC system

Bacteria is not only an indoor air quality health problem, but it can also restrict airflow inside the HVAC system. Bacteria is a natural part of our environment and given the right conditions, it will grow in an HVAC system.

The Breathe EZ UVC Light is professionally installed by a trained National Radon Defense dealer to improve the efficiency of the heating and air system and improve overall indoor air quality.

Many contractors are promoting Indoor Air Quality products that produce Ozone. National Radon Defense will not promote or sell any products that produce Ozone because it's not safe. Ozone-generating devices are being marketed to the public as a solution to indoor quality problems. Ozone generators are available in three forms: in-duct units for central air systems, portable indoor units, and personal units that are worn on the body. They are promoted as effective "air purifiers", especially to people sensitive to indoor air pollutants. Manufacturers often refer to the ozone as activated oxygen, trivalent oxygen or nature's air purifier to suggest that it is safe.

They advertise ozone's ability to oxidize indoor air pollutants and "leave only carbon dioxide, water, and breathable oxygen." However, independent studies have shown that ozone generators do not effectively destroy microbes, remove odor sources, or reduce indoor pollutants enough to provide any health benefits. More alarming, these devices can generate excessive levels of ozone and may contribute to eye and nose irritation or other respiratory health problems for users.

Evaluations of household air cleaners have been published by the Consumers Report14, the American Lung Association (ALA)18 and U.S. Environmental Protection Agency (EPA)19. The former two reports give explicit warnings against ozone-generating devices. The Consumer Reports' authors conclude, after performing tests, that they "wouldn't recommend an ozone generator even as a last resort."

Looking for a price? Get a no cost, no obligation free estimate.

We serve the following areas 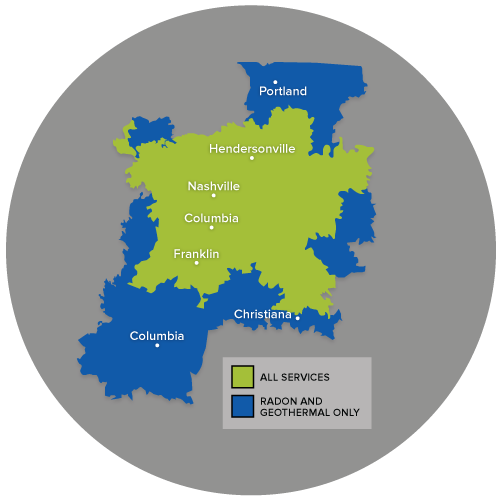